I was a Medicare auditor from July 1977 to January 1989. I enjoyed auditing and taking money from the providers and saving it for Medicare. It was like a chess game between the auditors and the providers and I think I played it very well. In all those years only two hospitals actually got money back from my audits. And if their consultants had not made serious errors, they would not have gotten that; I was always honest so I felt compelled to correct the errors.

In December 1979 and January 1980 I did an audit of St. Joseph Hospital, a 300+ bed hospital in San Francisco which had just closed. I was doing their last audit, solo, in an empty hospital with the hospital’s consultant sometimes there to provide records and a security guard to let me in and out.

Working solo on a hospital of this size was very unusual but, with no employees and getting records piecemeal from the consultant, it seemed the best approach. I was cold but not lonely as I had the “whole cake” to myself. I was in “hog heaven.” They would owe Medicare money when I was done.

In talking to Nancy, I learned she was born in this hospital. In late January, during the audit, I asked her for our first daytime date. It was a mystery date in that I did not tell her where we were going other than to San Francisco where we would have lunch. She got her parents to babysit her boys.

I got a written pass from the hospital consultant and we went and toured every floor of the large hospital (today the hospital is condos). We spent a couple of hours doing so and also visited the chapel, basement, and attic. Nancy and I loved it. I think Nancy’s parents and sisters thought I was strange (most still do). 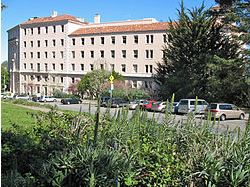