The number of estimated Americans who have died in our wars include;

All these wars share something in common except one. We have a National Memorial in Washington DC for every war except World War I.

World War I was originally called The Great War; 16 million people died (until WWII it was 4th on the history list of war deaths.)

The Liberty Memorial, located in Kansas City, Missouri, USA, is a memorial to the soldiers who died in World War I and houses The National World War I Museum, as designated by the United States Congress in 2004.

The DC War Memorial, officially named the District of Columbia War Memorial, commemorates the 26,000 citizens of Washington, DC who served in World War I. The memorial is located on the National Mall just west of 17th St. and Independence Ave. SW, next to the WWII Memorial. The domed peristyle Doric temple stands as the only memorial on the National Mall dedicated to local residents. Inscribed in the base of the memorial are 499 names of Washingtonians who lost their life during World War I. 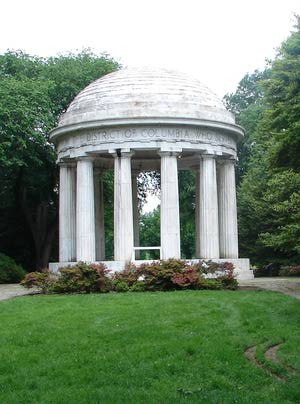 We got the WWII Memorial in large part due to the efforts of Tom Hanks and many volunteers. I am no Tom Hanks (but better looking) but I am asking for volunteers to join me in making a more prominent War Memorial for the Americans who served and died during World War I.

One thought on “War Memorials”